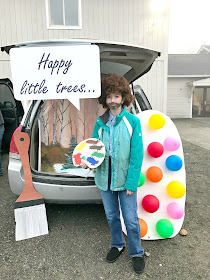 This year my church hosted a Trunk-or-Treat. (A Trunk-or-Treat is where trick-or-treating is done from parked car to parked car, in a parking lot, usually at a school or church. Totally sounds creepy when I type it out. But it's not. I promise.) This was my first time decorating our car for a Trunk-or-Treat. My original plan was to have a pumpkin theme. Like, pumpkin everything. Orange everywhere.
But then. BUT THEN...
Pazely & I stumbled across a Bob Ross costume at a local retail store--& it was over.
Pumpkin WHAT?! Orange WHO?!
Pazely, a huge Bob Ross fan, immediately volunteered to play dress-up for our event.

The costume only included a white paint palette, a paint brush, a wig & a beard. (You could certainly save yourself some money & put this kit together piece-by-piece on your own, or even use things you might already have around your house.) The beard was quite a bit more full than shown in the picture. So I gave it a haircut. But it still wasn't right. I might have gotten a little scissor happy.
So we just painted on a beard. No biggie. Bob would've wanted it that way anyway.

We thrifted a pair of mens jeans, along with a perfect light blue long-sleeved dress shirt. A belt was borrowed from the Mr. I didn't want to spend money on ugly mens shoes she might not ever wear again. So we bought some womens moccasin slippers that she'll wear every day. They worked!  (Unfortunately, the only photo I snapped was when Pazely had a coat on. It was quite a cold evening!)
And funny thing: without the beard, Pazely could almost pull off Napoleon Dynamite. Which was bonus, because Napoleon Dynamite is ANOTHER one of Pazely's faves. 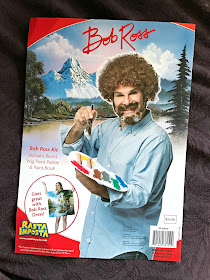 I needed something large enough to cover the opening of our trunk, so I decided to create a large "canvas". I scoured Netflix for the perfect Bob Ross painting episode. I wanted something wintery, yet warm. I found "A Copper Winter", Season 30 Episode 5, & it was perfect! 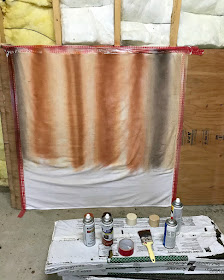 I purchased an inexpensive white bedsheet & cut it to fit a good size for hanging in the opening of my minivan trunk. (Mine was cut to 50" x 50" & then hemmed about 1/2" on each side.)
For painting prep, I taped the bedsheet to a large piece of wood. Then I spent the next day & a half in 40 degree (F) weather painting happy trees with numb fingers & toes. Bob takes 30 minutes. THIRTY MINUTES to paint his masterpieces. You are magic, Bob. (RIP)
Bob says "There are no mistakes, only happy accidents". Well, I made a lot of those. 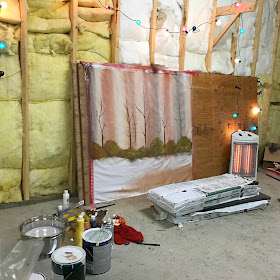 Acrylics on bedsheet don't blend as well as Bob's oils on canvas. But I hope I did Bob proud anyway. He is the man. He makes it look so easy. I watched the Copper Winter episode twice. And took notes. Bob makes me think I can do anything. 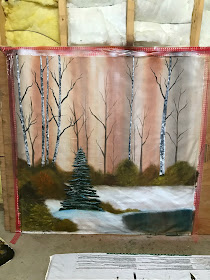 Pazely has claimed the painting for her own & has it currently hanging in her bedroom. Which made me super proud. How sweet! And what a compliment--especially since this was the first landscape I've ever painted. 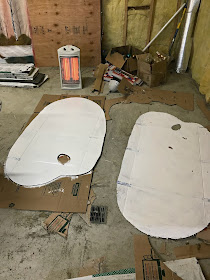 Pazely cut out a giant palette shape from moving boxes we had lying around. The moving boxes were fairly limp, so I reinforced the back with more cardboard + duct tape. I'm Super Budget Girl, so I didn't want to purchase anything we didn't HAVE to purchase. If I did it again though, I'd use something different. I've always wanted to try using large sheets of insulation foam for prop making. So I might give that a go in the future.
We painted the palette white.
(The photo shows two palettes. We only used one because we didn't have time to get a second one put together. Plus, our space wasn't really big enough for two.) 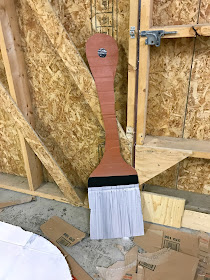 Pazely also cut out a giant paintbrush from moving boxes. We reinforced it as well, & painted it up. 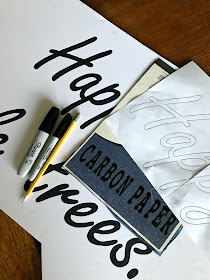 The speech bubble was cut out of foam core board. I printed out the words & traced them onto the speech bubble using carbon paper. The final step was filling in the words with a sharpie. I used a 500 size font in Freestyle Script. 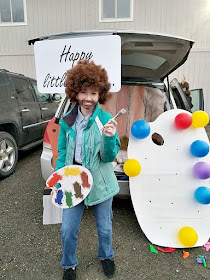 Balloons were attached to the palette to resemble different colors of paint. Inside the balloons were hidden treats & prizes! Kids would walk up to a balloon & "pop" it with a real paintbrush. (The paintbrush had a pin attached to the end.)
This is where things got tricky. And looking back I'd do it differently. I originally poked holes in the palette & "threaded" the knotted portion of the balloon through, holding it in the back with a clothespin. And that worked great at first.
But things got busy & it was hard to refill the palette fast enough. So then we started clothes-pinning balloons all around the edge just to keep up with the trunk-or-treaters stopping by. Which gave me an idea: I could have adhered clothespins to the front of the palette. DUH! It would've been so much more easy-peasy to change out balloons in a jiffy! There's always next year... 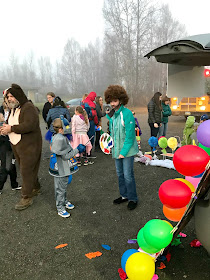 We had a lot of fun & I think the kids did too! Several costumed characters kept coming back for more. Each balloon was filled with either a piece of candy (the miniature chocolate bar kind) or toys & prizes I purchased from the party aisle of Walmart. A mixture of squishy eyeballs, glow-in-the-dark lizards, bubbles, stickers, fake mustaches, coin purses, bouncy balls, silly glasses, springy slinky-type toys, noisemakers, candy bracelets, toy cars, & ink stampers were stuffed into the balloons before blowing them up.
I do miss The Dollar Tree. There are no such things as dollar stores up here in Alaska. *sigh*

Anyway, it was a simple setup. If I had more time I would've cut out paint splotch shapes from colored paper & scattered them around the car. And maybe added a real easel with a small painting on it + tubes of paint & a dropcloth...

I hope this inspires you to get creative! Bob Ross is one of our faves. The 13-year old & I had a blast putting it together. She's my little artistic buddy, so it was a theme close to our hearts.

Trunk-or-Treats are a great way to interact with your neighbors & community. It was a cold night, but we had a nice fire going outside. And inside the church we offered bounce houses for the kids + free gourmet hot cocoa. Pumpkin spice hot chocolate? Come to mama. (It was delicious!)
We had 13 vehicles participate in the Trunk-or-Treat: Hunters, Pioneers, a Mermaid Lagoon, Lego Ninjas, Spiderman, Cheerleaders, Pirates, a Magic School Bus, an Under the Sea theme, a Shark, Candyland, & the cutest family of camping lumberjacks. We're guessing about 175 kids came through.
We can't wait to do it even bigger & better for Halloween of 2018!

Click HERE for a quick little video of our trunk in action. 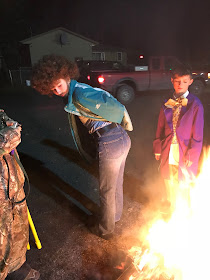 (Here's Bob, warming his happy little buns by the fire.)

“Mix up a little more shadow color here, then we can put us a little shadow right in there. See how you can move things around? You have unlimited power on this canvas -- can literally, literally move mountains."
-Bob Ross

Here are 50 more Bob Ross quotes to make you smile.

Thank you so much for taking the time to leave a comment. Every time you do, I do a little happy dance. For reals.